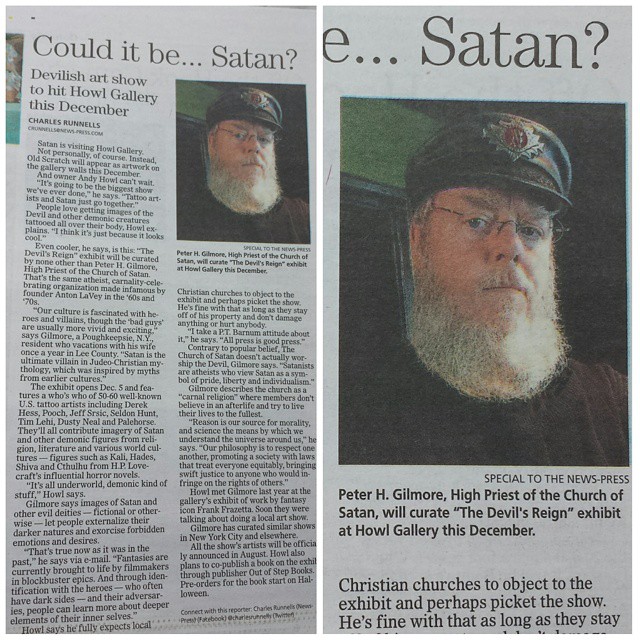 Not personally, of course. Instead, Old Scratch will appear as artwork on the gallery walls this December.

“It’s going to be the biggest show we’ve ever done,” he says. “Tattoo artists and Satan just go together.”

People love getting images of the Devil and other demonic creatures tattooed all over their body, Howl explains. “I think it’s just because it looks cool.”

Even cooler, he says, is this: “The Devil’s Reign” exhibit will be curated by none other than Peter H. Gilmore, High Priest of the Church of Satan. That’s the same atheist, carnality-celebrating organization made infamous by founder Anton LaVey in the ‘60s and ‘70s.

“Our culture is fascinated with heroes and villains, though the ‘bad guys’ are usually more vivid and exciting,” says Gilmore, a Poughkeepsie, N.Y., resident who vacations with his wife once a year in Lee County. “Satan is the ultimate villain in Judeo-Christian mythology, which was inspired by myths from earlier cultures.”

“That’s true now as it was in the past,” he says via e-mail. “Fantasies are currently brought to life by filmmakers in blockbuster epics. And through identification with the heroes — who often have dark sides — and their adversaries, people can learn more about deeper elements of their inner selves.”

Howl says he fully expects local Christian churches to object to the exhibit and perhaps picket the show. He’s fine with that as long as they stay off of his property and don’t damage anything or hurt anybody.

“I take a P.T. Barnum attitude about it,” he says. “All press is good press.”

Contrary to popular belief, The Church of Satan doesn’t actually worship the Devil, Gilmore says. “Satanists are atheists who view Satan as a symbol of pride, liberty and individualism.”

Gilmore describes the church as a “carnal religion” where members don’t believe in an afterlife and try to live their lives to the fullest.

“Reason is our source for morality, and science the means by which we understand the universe around us,” he says. “Our philosophy is to respect one another, promoting a society with laws that treat everyone equitably, bringing swift justice to anyone who would infringe on the rights of others.”

Howl met Gilmore last year at the gallery’s exhibit of work by fantasy icon Frank Frazetta. Soon they were talking about doing a local art show.

All the show’s artists will be officially announced in August. Howl also plans to co-publish a book on the exhibit through publisher Out of Step Books. Pre-orders for the book start on Halloween.