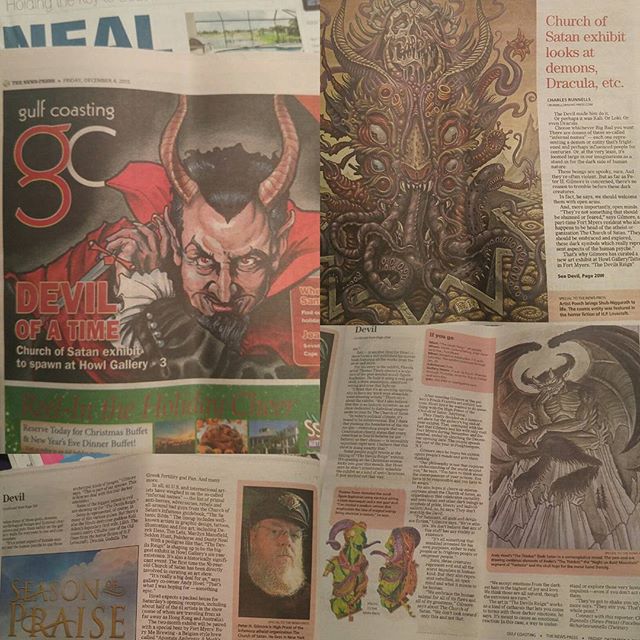 The Devils Reign was featured in a News-Press entertainment section cover feature and 4 page article the day before the Book Release and Opening Reception, Friday December 4th.

The Devil made him do it.

Or perhaps it was Kali. Or Loki. Or even Dracula.

Choose whichever Big Bad you want: There are dozens of these so-called “infernal names” — each one representing a demon or entity that’s frightened and perhaps influenced people for centuries. Or, at the very least, it’s loomed large in our imaginations as a stand-in for the dark side of human nature.

These beings are spooky, sure. And they’re often violent.  But as far as Peter H. Gilmore is concerned, there’s no reason to tremble before these dark creatures.

In fact, he says, we should welcome them with open arms.

“They’re not something that should be shunned or feared,” says Gilmore, a part-time Fort Myers resident who also happens to be head of the atheist organization The Church of Satan. “They should be embraced and explored, these dark symbols which really represent aspects of the human psyche.”

That’s why Gilmore has curated a new art exhibit at Howl Gallery/Tattoo in Fort Myers. “The Devils Reign” takes many of those gods, demons, mythological beings and fictional characters and puts them safely on the gallery walls for everyone to see and contemplate.

“It’s a potent aspect of human society and the human psyche to use these archetypal kinds of images,” Gilmore says. “This is part of our species. This is how we deal with this (our darker emotions).”

Some of the biggest names in evil are showing up for “The Devils Reign.”

Satan is represented, of course, in many of His various guises. But there’s also the Hindu destroyer goddess Kali. Adam’s legendary first wife, Lillith. The cosmic entity Cthulu (one of the Old Ones from the horror fiction of H.P. Lovecraft). Dracula. Godzilla. The Greek fertility god Pan. And many more.

In all, 61 U.S. and international artists have weighed in on the so-called “infernal names” —  the list of  primal anti-heroes, adversaries, rebels and all-around bad guys from the Church of Satan’s infamous guidebook, “The Satanic Bible.” The lineup includes well-known artists in graphic design, tattoos, illustration and fine art, including Derek Hess, Tim Lehi, Marilyn Mansfield, Seldon Hunt, Palehorse and Dusty Neal.

With a pedigree like that, “The Devils Reign” is shaping up to be the biggest exhibit in Howl Gallery’s six-year existence. It’s also a historically significant event: The first time the 50-year-old Church of Satan has been directly involved in curating an art show.

“It’s really a big deal for us,” says gallery co-owner Andy Howl. “That’s what I was hoping for — something epic.”

Howl expects a packed house for Saturday’s opening reception, including about half of the 61 artists in the show (some of whom are traveling from as far away asHong Kongand Australia).

The two-month exhibit will be paired with a special beer by Fort Myers’ Bury Me Brewing – a Belgian-style brew called “Apostate Ambrosio: A Monk’s Ale.”

And — in another first for Howl — there’s also a self-published hardcover book featuring all the works from the show and more.

For his entry in the exhibit, Florida artist Thomas Thorn created a sculpture of the goat-headed occult figure Baphomet. He built it using a real goat skull, a store mannequin, electrical wiring and eyes that light up.

“I think that it’s an exciting opportunity to have my work seen alongside some amazing artists,” Thorn says about the exhibit. “But I also believe that this is an historic occasion: an art show dedicated to diabolical imagery underwritten by The Church of Satan.

“In today’s political climate, it’s bound to be controversial. But I think that pushing the boundaries of the status quo —reminding people that our Constitution clearly states that every American is free to believe (or not believe) as they choose — is incredibly important right now. I believe that this show is doing exactly that.”

Some people might bristle at the timing of “The Devils Reign” exhibit: It’s opening as the Christmas season kicks into gear this month. But Howl says he didn’t intentionally schedule the exhibit as a kind of anti-Christmas. It just worked out that way.

After meeting Gilmore at the gallery’s Frank Frazetta art exhibit last year, Howl knew he wanted to do something with the High Priest of the Church of Satan. Anything.

They finally decided on a massive art show for the gallery’s big end-of-year exhibit. That, combined with the fact that Gilmore and his wife only visit Fort Myers during November and December, ended up clinching the December opening date. The couple spends the rest of the year in Poughkeepsie, N.Y.

Gilmore says he hopes his exhibit opens people’s minds and gets them thinking.

“Our philosophy is one that requires an understanding of the world around you,” he says. “You have to think about the consequences of your actions. You have to be responsible and you have to be aware.”

He also hopes it clears up misconceptions about the Church of Satan, an organization that celebrates carnality and sees Satan and other dark beings as symbols of pride, liberty and individualism. And, no, he says: They don’t worship the Devil.

“For Satanists, all gods and devils are fiction,” Gilmore says. “We’re atheists. We don’t believe that any of this stuff has any reality in existence.

“It’s all something that mankind invented for his own purposes, either to rule people or to frighten people or empower people.”

Sure, these creatures represent evil and all the worst impulses in humankind. But they also represent rebellion, an open mind and what it means to be human.

“We embrace the human animal for all of its flaws and all of its greatness,” Gilmore says about The Church of Satan. “We don’t look toward only this and not that.

“We accept emotions from the darkest hate to the highest of joy and love. We think those are all natural, though the extremes are rare.”

The art in “The Devils Reign” works as a kind of catharsis that lets you come to terms with those darker emotions, he says. It’s meant to cause an emotional reaction: In this case, a way to understand or explore those very human impulses —even if you don’t act on them.

“They’ve got to shake you up,” Gilmore says. “They stir you. That’s the whole point.”