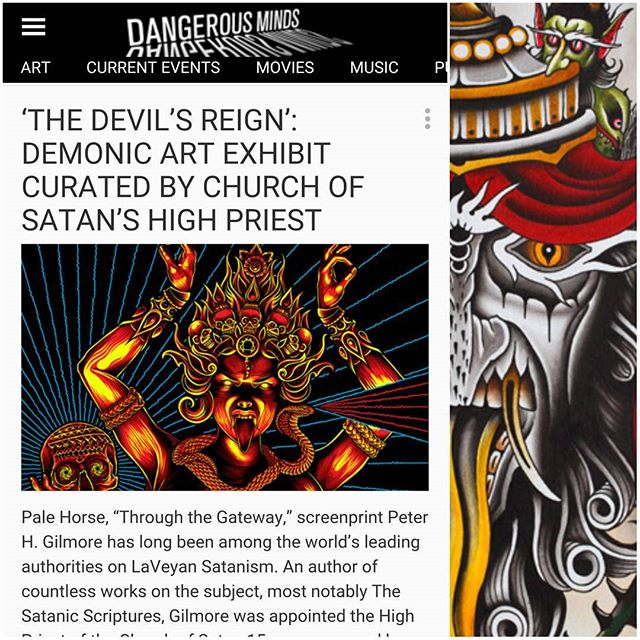 Peter H. Gilmore has long been among the world’s leading authorities on LaVeyan Satanism. An author of countless works on the subject, most notably The Satanic Scriptures, Gilmore was appointed the High Priest of the Church of Satan 15 years ago, and has since served—not without controversy, unsurprisingly—as caretaker of the Anton LaVey legacy, even writing a new introduction to The Satanic Bible, the book that changed his life in his early teens (say what you will about that, hey, at least it wasn’t Atlas Shrugged).

Gilmore has recently endeavored to curate a Satanic art exhibit called “The Devil’s Reign” (a cheeky nod to an old film) for Howl Gallery, a combination exhibition space/tattoo shop in Ft. Myers. FL. The show is traveling, and it opens tonight, April 1, 2016 at Stephen Romano Gallery In Brooklyn, and it’ll travel to Eridanos Gallery & Tattoo in Boston for an opening on May 6th. The show seeks to acquaint viewers with expressions of devils from many cultures, though deities that were turned to devils and demons by Christianity are by far the most often featured, and curiously, figures from the Lovecraft mythos make appearances. “Since all deities and devils are invented,” Gilmore writes in his foreword to the exhibit’s companion book, “Satanists can employ any, from whatever fiction they find inspirational, as a means for emotional excitement in ritual.” He continues:

“Whether the artists crafted these images to purge themselves of some withheld impulses or as celebrations of others, they function as visual rituals, offering viewers much over which to ruminate. Of this tenebrous throng, some will have been or will be inscribed upon human flesh. Their bearers might wish to absorb and dominate them, or to boldly proclaim allegiance to these sovereigns of Hell.

Devilish art has long been said to mock authority, to frighten the gullible into beliefs contrary to their nature, and to both embody and expose complex elements of the human animal and his frequently savage societies. The Church of Satan proposes that one can explore and fulfill one’s desires when they are experienced as controlled indulgence, not frenzied compulsion—an Epicurean rather than Hedonistic approach. Each artwork here can thus be a means for self-reflection, or for seeing worldly perspectives that may previously have remained hidden.”