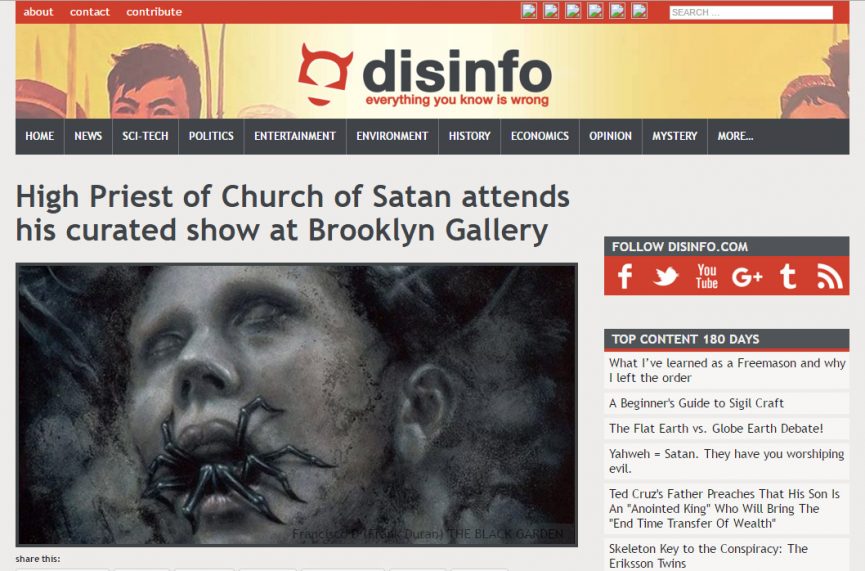 Peter H Gilmore, High Priest of the Church of Satan has curated an exhibition of artwork entitled “The Devils Reign” for Stephen Romano Gallery in Bushwick.  The opening reception in early April was attended by Gilmore himself, making a very rare public appearance, and several hundred people who seized the opportunity to have an audience with the man.

Says Peter H  Gilmore:  “THE DEVILS REIGN serves to illustrate aspects of the human animal often suppressed, but better released in joyful indulgence. I am honored that Stephen Romano has graced us with his magical space so that we could bring this exciting work to New York City, an exemplary way to celebrate the 50th anniversary of the founding of the Church of Satan in 1966 by Magus Anton Szandor LaVey.”

Notable artists in the exhibit include rock poster icon Derek Hess, whose work is included in the collection of The Louvre Museum in Paris and The Rock N Roll Hall of Fame. Modern day tattoo legends Tim Lehi,  Derek Noble, Dusty Neal, Curt Baer, Uncle Allan, and Timothy Hoyer all accepted invitations to participate. Well known heavy metal album illustrators such as Seldon Hunt, Shaun Beaudry, Palehorse, and Florian Bertmer also contributed artwork. Stylistically, the works range from the gothic and grotesque to art influenced by Japanese and traditional tattooing styles.  Artists in attendance at the reception were Michaelanthony Mitchell, Josh McAlear from Eridanos Gallery/Tattoo in Boston, Pale Horse from Tampa, Seldon Hunt from Brooklyn, Marilyn Mansfield, Ma Mitchell, Zoth Ommog, and Andy Howl who organized the show  from his gallery in Fort Meyers Florida Howl Gallery.  The exhibition is accompanied by a book also entitled “The Devils Reign” available at Howlbooks.net.

Exhibition producer Andy Howl said “Putting this show together and then having it ship to Brooklyn for a second opening was a big deal for us.  Just crazy. Every aspect of getting the show together, and then opening it in New York has been way to easy.  All the pieces just fit into place. The gallery was packed all night.  So many great people came out for the show. Romano Gallery did an amazing job with all of it.”

“I’ve been curious about the Church of Satan since my early teen years” said gallery owner Stephen Romano “I dont recall exactly how I came across the works of Anton LaVey, they may have just been accessible to me through my local book store in small town Ontario where I grew up”   Romano continues  “I was known as a Satanist in high school and rumored to have done all kinds of nasty things that dont even remotely align with Satanic belief.  But of course at the time I figured “Love me or hate me, but dont ignore me”.  I have a small collection of occult books, some are notable including the infamous Doktor Johannes Faust’s Magia naturalis et innaturalis and Dictionnaire Infernal, most of them are in my possession for aesthetic appreciation.  I must say I am very honored to be hosting this exhibition curated by Peter H Gilmore.  Exhibitions come and go, some remain in our memory for years to come.  This is a once in lifetime thing, very special. Ultimately it’s about the artists, they are the guests of honor.  There is so much proficiency and self respect in this work that you dont see much of in mainstream contemporary art.  The works connect very strongly with the viewers, converts and non converts alike.  That’s what the celebrations is all about, the love the artists have for their craft.”

Life is once, show up for it.

full catalog of the exhibition THE DEVILS REIGN.