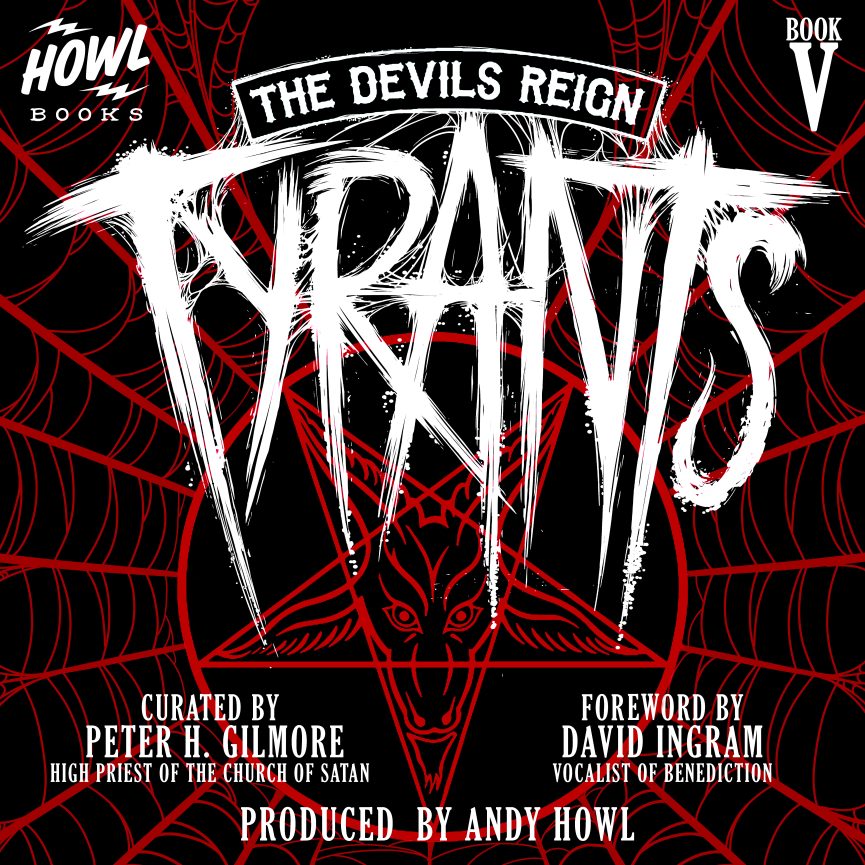 The long awaited 5th book in The Devils Reign art book series is now active and launching on Kickstarter in February 2023. Curated and with an introduction by Peter H. Gilmore, High Priest of The Church of Satan and including a foreword by David Ingram, lead singer of legendary heavy metal band Benediction.

Tattoo artist and producer of the book series, Andy Howl, will again be assembling a stellar list of artists for the book, including illustrators, tattoo artists, photographers, sculptors, and more… Along with open submissions from the general public. Submissions will begin Spring 2023.

The limited edition tome is a hardbound 9×12 book, and features a 2 color metallic foil stamped cover with over 150 pages of original artwork. Each book in the series has featured over 100 artists contributing work that fits within a specific theme. Book I featured The Infernal Names from The Satanic Bible, Book II: Psychedelic Blasphemy showcased the intersection of hallucinogens and free thought, Book III: Daikaiju brought giant monsters to the series and Book IV: All of Them Witches focused on female empowerment. Now with book 5 we balance the series with a focus on male villainy and megalomania.

The Devils Reign 5: TYRANTS!
A Gallery of Rogues, Blackguards, and Scoundrels.

While the fourth entry in our series of books and exhibitions explored the darkest aspects of femininity, it is now time to conjure forth the most toxic forms of masculinity that one could imagine. While we’ve previously dealt with mythical demons, devils, and daikaiju, now we task our artists to explore humanity’s male monsters. One might depict historical despots, manipulators, and conquerers such as Caligula, Attila, Hitler, Robespierre, Pol Pot, Rasputin, Tamerlane, Stalin, and Vlad the Impaler. Utter fiends Witch Finder Matthew Hopkins and the Grand Inquisitor Tomás de Torquemada slaughtered innocents in service of their theology and their evil must not be forgotten. Serial killers, notorious or obscure, are of< course fair game—Bundy, Dahmer, Fish, Holmes, Gacy, Gilles de Rais and others of their ilk. Gangsters Al Capone, John Dillinger, Whitey Bulger, Bugs Moran and their brothers in crime victimized so many and are worthy participants in this rogues gallery. The pitiless pirates Bartholomew Roberts (Black Bart), Captain Kidd, Sir Henry Morgan, and fellow buccaneers doomed their prey to watery graves, so they too would serve as fine subjects.

And, if these madmen from the blackest pages of history don’t incite you, one may also render men of dark ambitions and darker doings who have come forth from the grim recesses of the minds of their inventors. Look to the likes of Professor Moriarty, Iago, Darth Vader, Saruman, The Joker, Reverend Harry Powell, Hannibal Lecter, Freddy Krueger, Fu Manchu, Michael Myers, Norman Bates, Ernst Stavro Blofeld, and Ming the Merciless to inspire fear and loathing.

Those who exhibit “maximum testicular baditude” must be your subjects. Men whose atrocities might be the stuff of both legends and nightmares should malevolently cast their domineering gaze upon all daring to view these portraits of tyranny. Let the “Bad Guys” reign!

HOWL Books will be launching the Kickstarter campaign in February 2023 with a projected book release in December 2023.

For more information or to request interviews on the project contact HOWL Books: howlbooksllc@gmail.com

All orders ship from our store and tattoo shop in Fort Myers, Florida. Please allow up to 3 days for order processing. For order questions please email us howlftmyers@gmail.com or call (239)332-0161 12-6pm M-Sat Dismiss