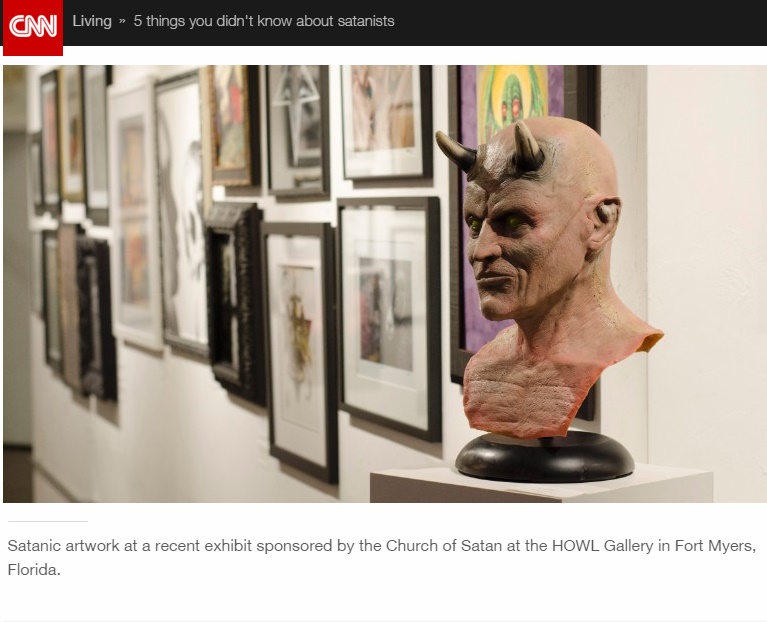 The Devils Reign art show and book release was included in this feature article on CNN about Satansim,  December 2015.  The exhibit was curated by Peter H Gilmore, High Priest of the Church of Satan, who was also quoted throughout the piece.
Excerpts from the CNN story below.
—

5 things you didn’t know about satanists
By Tricia Escobedo, CNN

Surprisingly, most card-carrying satanists do not worship Satan or any other form of the devil — they are actually atheists. The Church of Satan, founded in the mid-1960s, explains it this way on its website: “Satan to us is a symbol of pride, liberty and individualism, and it serves as an external metaphorical projection of our highest personal potential. We do not believe in Satan as a being or person.”

The Church of Satan puts the individual at the center of the universe, what high priest Peter Gilmore describes as going from an “a-theist” to an “I-theist.”

You won’t find a satanic church in your community

The Church of Satan doesn’t have actual church buildings, because “that would be against our individualist approach to living,” its website says. For a short time, its founder Anton LaVey used his San Francisco home as the church’s headquarters, where he performed rituals. Now, the church is based in New York, and its headquarters is not open to visitors.

The Church of Satan once had “grottos,” or local chapters, but it disbanded those after deeming them “unnecessary.”

“When we have events, they are private and at times discussed later, such as the conclave in Washington, D.C., that marked the beginning of celebrations for our 50th year of existence,” Gilmore explains.

Symbolism and art are important

The Church of Satan also incorporates art into its practice, although for verydifferent reasons than the more community activist-driven Satanic Temple.

“Satanists feel that we should proudly admire this most precious human capacity without the need to use mythological figures as distancing intermediaries.”

The Devils Reign exhibtion is on display at HOWL through the end of January 2016.