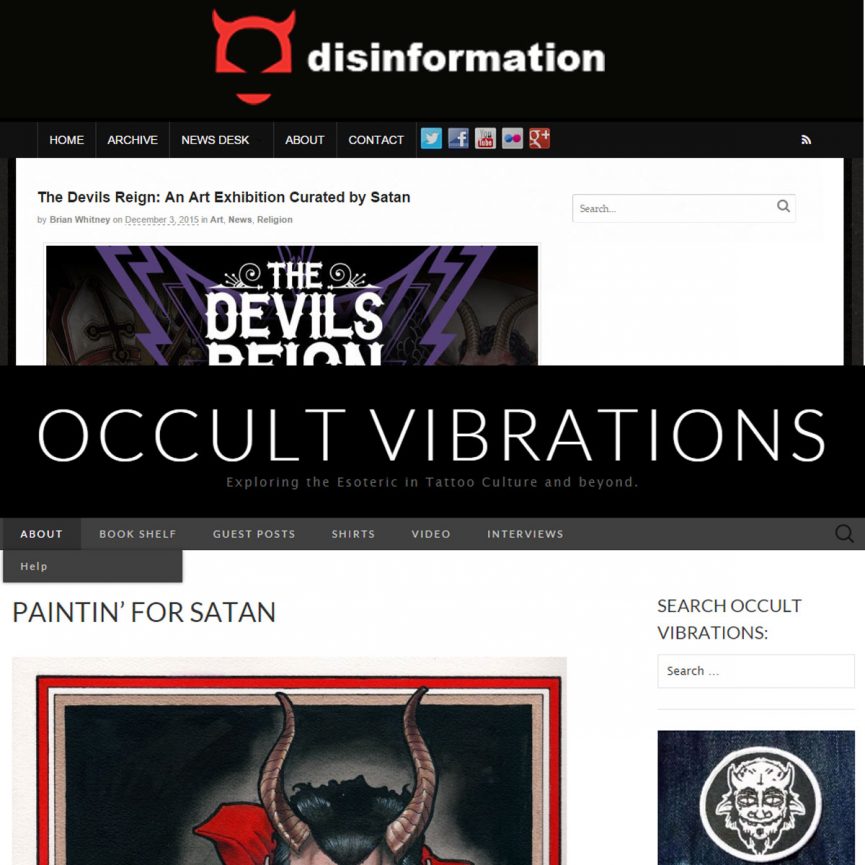 HOWL Gallery featured in disinformation.com and Occult Vibrations blogs!
The Devils Reign, curated by High Priest of the Church of Satan, Peter H Gilmore, was featured on both Occult Vibrations and Disinfo.   Two of our favorite places to visit on the interweb.  Thanks to both of them for featuring our December 2015 art show and first book release.

The Devils Reign: An Art Exhibition Curated by Satan

Well, okay, maybe not Satan, but the Church of Satan High Priest, Magus Peter H Gilmore. He has curated an art exhibition and accompanying book that will both debut on December 5th in Fort Myers, Florida. HOWL Gallery/Tattoo will be the host of The Devils Reign, a two month art show featuring many of the world’s best known tattoo artists, as well as illustrators, photographers, painters, and sculptors. The show also includes work by some of the Church of Satan’s top dogs. Over 60 artists were selected by Magus Gilmore for the exhibition that runs from December 5th until January 30th. The limited-edition hardcover exhibition book will be available during the opening reception and afterwards.

The Devils Reign features images depicting devils and dark gods from current and past cultures, as well as monstrous characters inspired by HP Lovecraft’s Cthulu mythos. The Satanic Bible, first published in 1969 and written by Church of Satan founder Anton Szandor LaVey, was used as inspiration for the exhibit. Artists referenced LaVey’s roster called The Infernal Names which features a list of more than 50 devilish deities compiled from world mythology, including Satan, Lilith, the Greek fertility god Pan, Dracula, Loki, and even Hindu divinities Shiva and Kali. This is the first show and published art book of its kind associated directly with the Church of Satan. The book looks quite cool I must say.

Magus Gilmore had this to say about the opening: “For this exhibition, The Devils Reign, we have called forth artists who work in many different styles. We have gathered their renditions of the dark figures whose dreadnames were employed by LaVey as keys to unleash oft-hidden aspects of the human psyche. As he said himself, ‘There is a beast in man that should be exercised, not exorcised!’ Whether the artists crafted these images to purge themselves of some withheld impulses or as celebrations of others, they function as visual rituals, offering viewers much over which to ruminate. Of this tenebrous throng, some have been or will be inscribed upon human flesh. Their bearers might wish to absorb and dominate them, or to boldly proclaim allegiance to these sovereigns of Hell.”

“Devilish art has long been used to mock authority, to frighten the gullible into beliefs contrary to their nature, and to both embody and expose complex elements of the human animal and his frequently savage societies. The Church of Satan proposes that one can explore and fulfill one’s desires when they are experienced as controlled indulgence, not frenzied compulsion—an Epicurean rather than Hedonistic approach. Each artwork here can thus be a means for self-reflection, or for seeing worldly perspectives that may previously have remained hidden.”

Check out The Devils Reign, it is sure to be a wild ride.

Current Church of Satan Magus Peter H. Gilmore is a pretty fascinating guy. I’ve been following his tumblr a while for his amazingly detailed cinema reviews (his two part review of the 2015 Godzilla remake would make a PhD thesis seem like it didn’t try hard enough) and thoughts on life and generally thought he couldn’t get much cooler.

Then I saw that he was curating a show for the folks at the HOWL TATTOO Gallery down in Florida. It’s one thing to mix Satan with cinema, but when he gets his scaly mitts on tattooing it seems like it could be the perfect combination. I can’t wait to see the book!

From Gilmore’s introduction:
“For The Devils Reign, our artists work in many styles to evoke the fantastic and demonic. Their renditions of the dread names from Anton LaVey’s The Satanic Bible serve as keys to unleash oft-hidden aspects of the human psyche. As he said himself, “There is a beast in man that should be exercised, not exorcised!.” Devilish art may mock authority, frighten the gullible, and embody complex emotions. Here you’ll find gateways for self-reflection, for opening one’s mind to unique perspectives.”